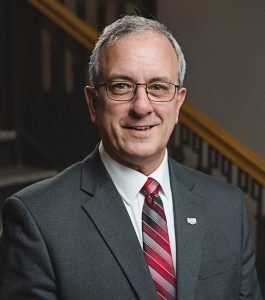 Mayor Ley became Mayor of Auburn in 2020. A lifelong resident of Northeast Indiana, Ley has long been involved with Auburn's continued growth and development. He worked for 13 years as an administrator in the city's Building, Planning and Development (BPD) Department. His impact on Auburn's growth continued in the private sector. As owner and president of Signature Construction, Ley was involved in building a great portion of the city. His passion for enhancing this community continues as Mayor with his focus on the city's master plan, roadways and parks system. Ley is a member of the American Legion, the DeKalb County Fair Association and other local organizations.

Patty Miller has worked for the City of Auburn since 1976, starting in utility billing and holding various positions over the years. Since 2004, she's served as Clerk-Treasurer, where she is responsible for the overall collection and disbursement of all city funds. Additionally, she maintains city records, prepares legal notices and monitors department budgets. As part of the role, she serves as secretary to the Common Council, Board of Public Works and Safety, and Redevelopment Commission. Patty enjoys serving her community and looks forward to helping the city leverage technological advances.

The City of Auburn’s City Council is comprised of five districts. City Council members from these districts help oversee the city budget and pass city ordinances and resolutions. View the Council Districts (PDF).